Summer 2011 : the origins of the Tangou project

" 2 weeks for the first time in Mali. Back home with a head full of memories and impressions from contact with this population made up of different ethnies living together.

In the souk of Bamako, a magnificent chess game, sculpted by Tuareg craftsmen holds all my attention ...


On my return, this Tuareg salesman named Allassane, asks me for help to educate the children of his native village which is in the Sahelian zone, bordering the Sahara, close to the Dogon country and 7 km from Douentza. 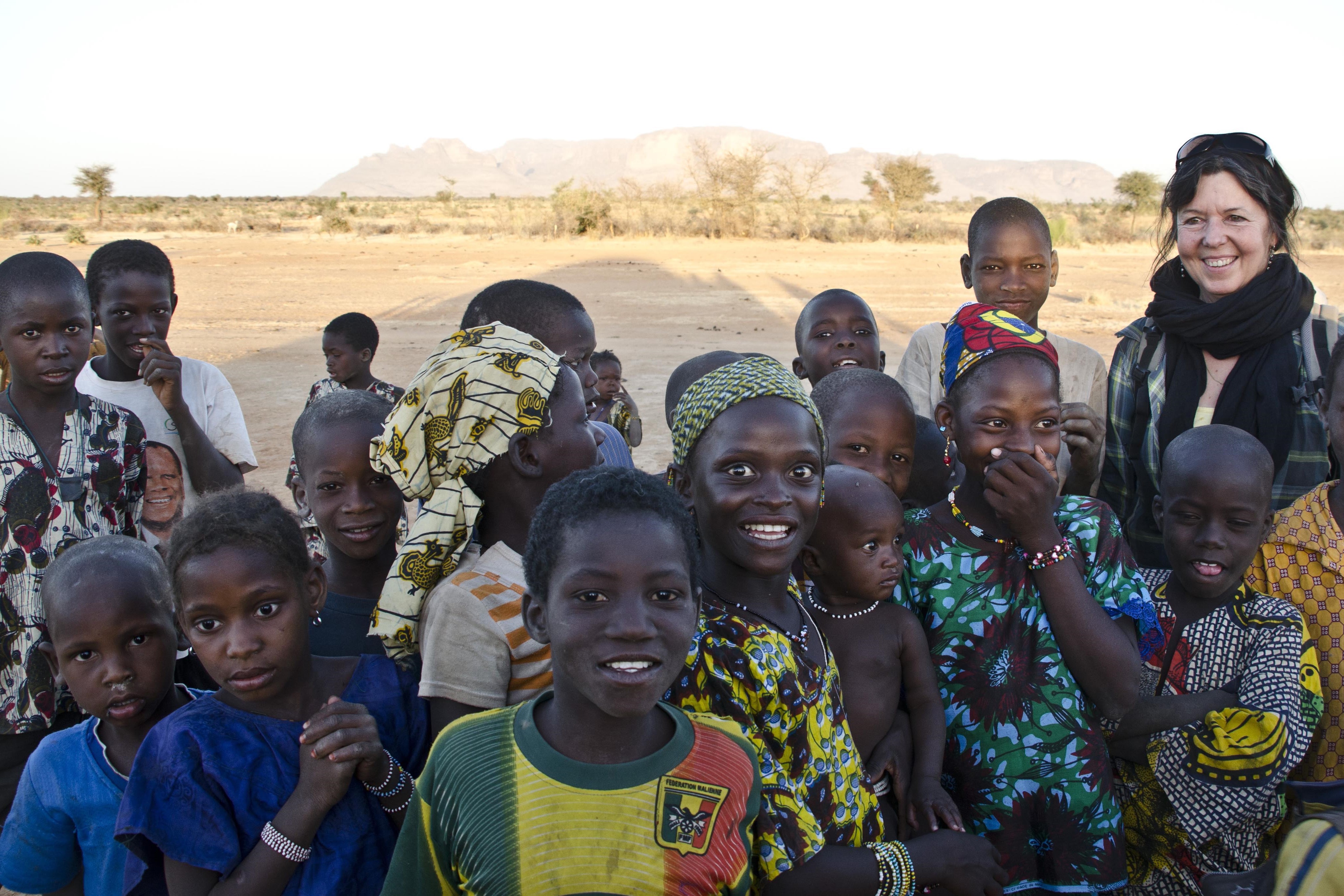 In the autumn Allassane contacts me by phone to tell me again about his concern about the schooling of the children in his village.
There is no school less than 7 km from Douentza, 35 children of school age but no means of transport or possibility of financing school supplies.

In the emergency, we decide, with a friend, to finance the supplies."

Faced with this reality, the idea is confirmed in our minds of the need to create a school in Tangou.

Initially, the headchief of the village proposes to donate the land for the school.
At the same time, Allassane, having returned to Bamako, approached the Ministry of National Education to obtain authorisation to create a school and obtain the appointment of a Malian teacher.

The parents are mobilising to build the school with the means at hand.
Millet stalks for the walls and roof, tree trunks as benches. 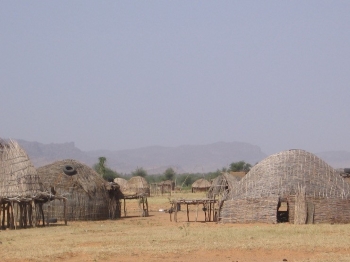 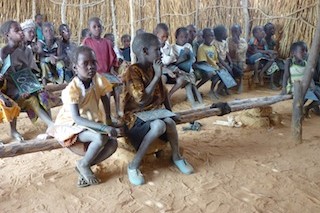 Before the start of the school year, 2 donkeys are purchased as well as a cart equipped with a 50-litre metal barrel to ensure the school's water supply.

A vegetable garden is created in Douentza to ensure the supply of fresh vegetables for the school canteen.

2 villagers are responsible for filling up the water supply in Douentza, growing and harvesting the vegetables to bring them back to the canteen lady so that she can prepare the meals for the 35 children with the full water supply. 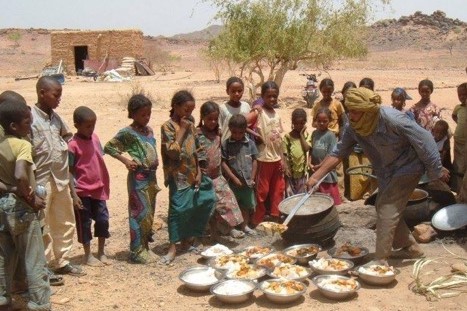 The school opens with 1 teacher and 35 pupils. 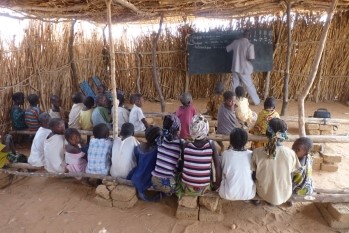 Sponsorships are in place for 4 children (3 girls and 1 boy) who are older and attend public school in Douentza.

The women of Tangou support us by producing traditional handicrafts (baskets, coasters, mats, bracelets) that Sahara Anmilale will sell in Europe. 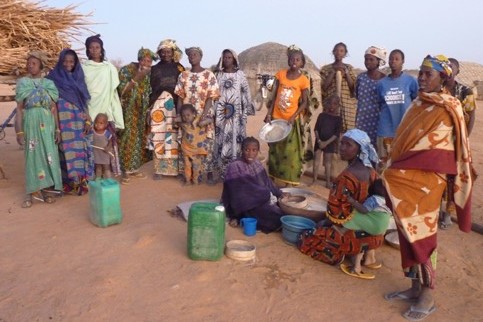 March 2012: Military Putsch, overthrow of the head of state and his government.
In the north, the rebellion gains momentum and spreads over a large half of Mali.

At the end of May 2012 the situation in the region worsens. Douentza is occupied, school groups are requisitioned by the Jihadists to make them their headquarters.

Families with no means to expatriate themselves have taken refuge in the bush, particularly in Tangou. A large number of children attend school.

In mid-July, Douentza was released by the Malian army without violence after negotiations.

The teacher volunteers an extra month of classes to catch up with some of the children.

Since the beginning of the school year, the association has been financing:
At our request, the Kokopelli association donated 4 kg of seeds of various vegetable varieties that Maya will then give to Allassane in February 2013 during a stay in Bamako, which was cut short due to insecurity.

The makeshift school is damaged by bad weather and the villagers are once again mobilising to rebuild with the same materials.

The need is felt to build a permanent school to better protect the pupils from sandstorms, sun and rain.

Since the liberation of Mali by the French and Malian armies, NGOs have been able to step back in the area, including Douentza.

Our association is financing the construction of a food storage in Tangou for the food which is distributed by the World Food Programme (WFP).

Oneof Allassane's former school teacher, informed of the work he is doing with the support of our organisation, tells him about the arrival of NGOs financing the construction of schools and wells.
Allassane puts together a file, reinforced by a government certificate, in order to obtain the masonry rebuilding of the school, as well as the drilling of a well.
The file is accepted and a project for an enclosed vegetable garden is included.

The foundation stone of our school is laid in the presence of the local authorities.
Plan Mali and World Vision finance :

Two teachers and a trainee teach there.

A teacher from Bamako is sent to Tangou during the summer to give remedial classes for the new programmes.

November 2015
The construction site is finished and the first photos are coming in. 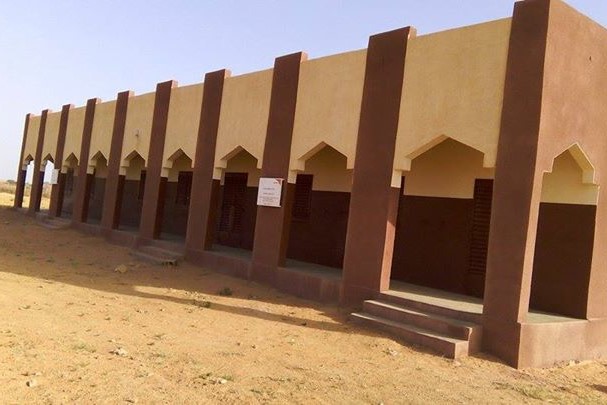 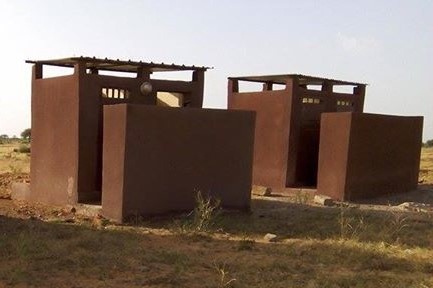 Several exhibitions-sales of photos and paintings are taking place in different villages around Villecroze, France, thanks to the donations of several artists.

With the theme "AMAN IMAN - L'EAU C'EST LA VIE - WATER IS LIFE", these exhibitions generate profits that help co-finance a well in Tangou in partnership with an American church.

November 2016
The well and a water tower are built. 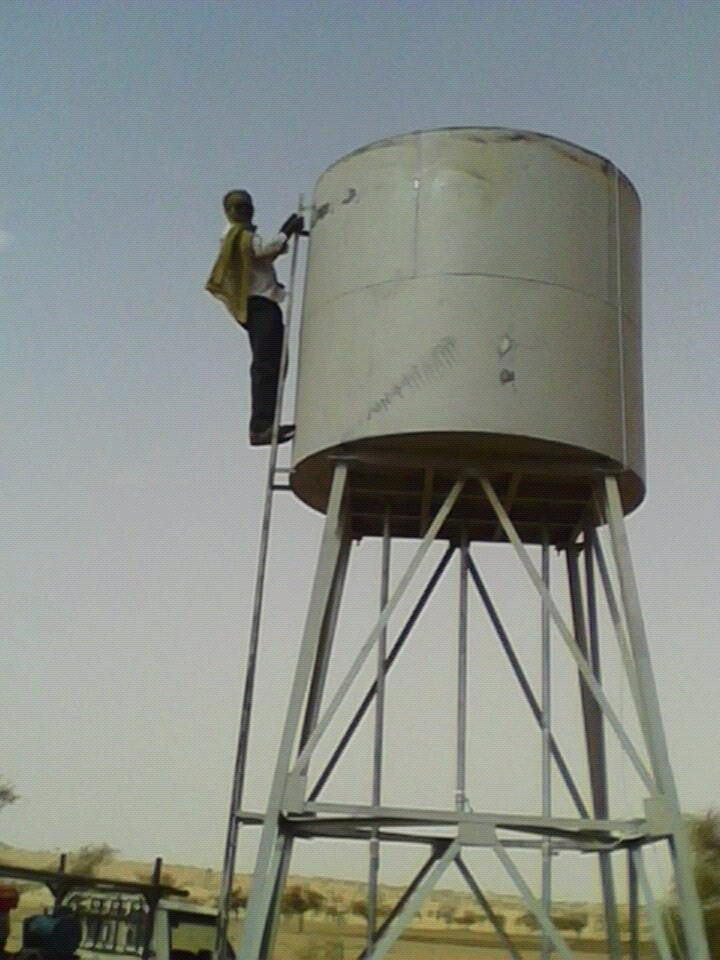 The local authorities are financing the pump powered by solar panels.

The school in Tangou benefits from an aid plan from a Monegasque NGO, along with 5 other schools in the surrounding area, which allows for the creation of a dispensary next to the school buildings.

A doctor visits it once a month. Sahara Anmilale finances 2 medical beds and 2 mattresses.

November 2017
Tangou school is subject to inspection by the Ministry of Education, which notes the large number of students attending the school.
The Ministry then undertakes to build 3 additional secondary school classrooms on the condition that a fifth primary school classroom is built as a permanent structure, directly financed by the village.

The villagers request our help in this construction.

The makeshift millet stalk class dedicated to the first year of primary school is replaced by a permanent classroom, built by the parents of the pupils.
We are financing the stone and cement base and the sheet metal for the roof, while the villagers take care of the banco walls.

Two additional teachers will be assigned to the Tangou school from February 2018.

At the moment, we are continuing our efforts to ensure: 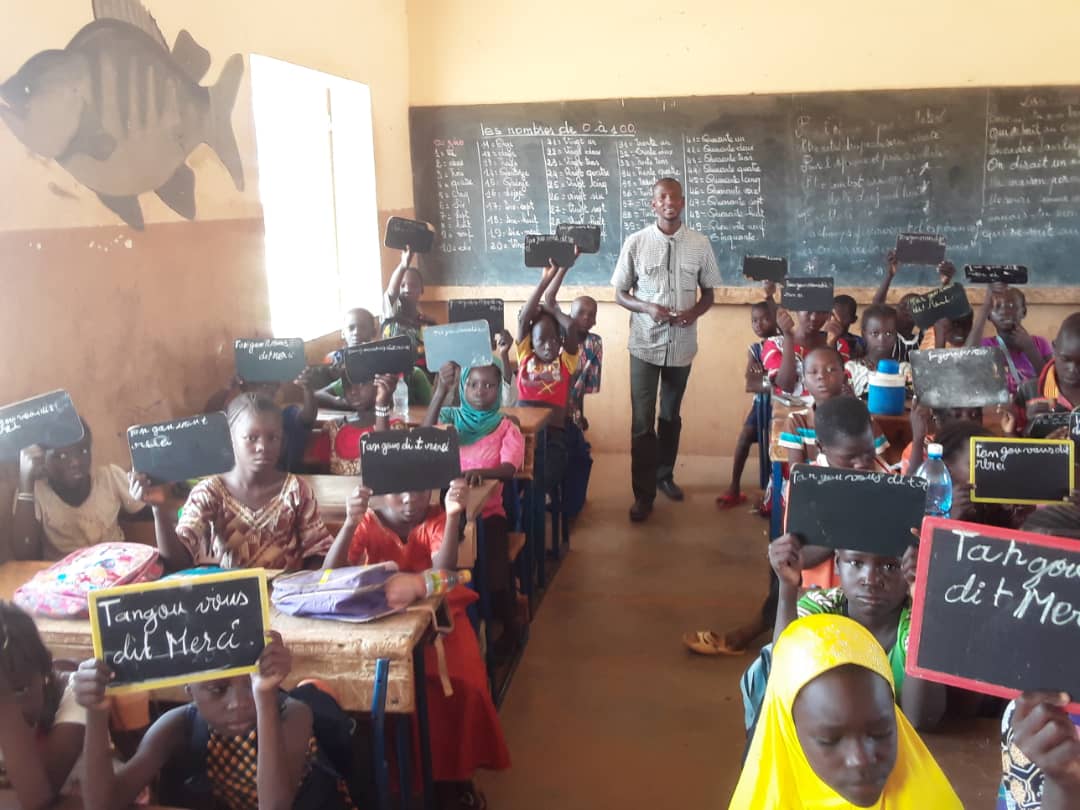